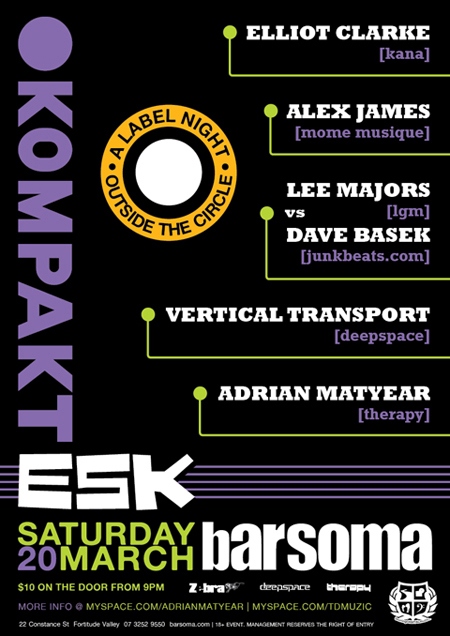 Elliot was bred through schoolyard escapism via headphone noise art and abstract techno, honed through many hours on the nightshift, and crafted with a street toughness throwing parties. Proper underground parties. His imaginative Kana soiree has brought smiles and arms in the air to some of Brisbane’s grandest outdoor locations, all to the soundtrack of serene, organic and mind bending deep house and techno. Parks, on bridges, under bridges, train station back lots, Elliot Clarke has demonstrated the effectiveness of simplifying the party experience back to good people, great soundtrack and extreme locations and in turn it has become a peaceful protest of party people presenting. Along the way the Kana operation garnered intense support from Brisbane’s connected dancers, all relishing the chance to have a near religious experience as the afternoon sun hits the glass and concrete spires of the city in the backdrop of another surreal Kana urban throw down. In the club too, Elliot transfers maximum musical energy to the dancer, crossing deep house, techno and progressive in search of the most physical movement of air from the speaker to the dance floor. His studious approach and effortless execution has been called on to present quality local direction for visiting internationals including Pig and Dan, John Selway and Alex Smoke.

Initially studying the craft in the steep learning curve of the Gold Coast affray, Alex quickly became a prominent player in a city where the underground set were reliant on dedicated party connections and knowledgeable scribes to trade in the deepness that was gaining a foothold in the underbelly of the glitter strip. His involvement with the Elsewhere and Platinum operations, particularly his guidance of the Complex gatherings produced rapid results and pitched him against the likes of Moonbeam, Lutzenkirchen, and Ekkohaus. In between all this busyness, Alex found himself making daytrips to Brisbane to meet with the Delicious crew, and Saturday Sessions at Birdees, as well as regarded displays at Global Gathering and Future Music Festival. Now a permanent resident of the city, he has acquainted himself further with the party crews Deeparture, Subtrakt, Somadose and Therapy.

Lee Majors (aka Tickle), recognized by most as Byron Bay’s first underground club DJ, began spinning at the legendary Carpark nightclub playing weekly gigs including 5 hour super sets on the weekend. DJ Tickle (known then) was also a household name at the big parties and festivals such as Splendour in the grass, and the infamous beach and biker parties. Later moving to Sydney saw him at highly regarded nights such as ‘Toasted’, ‘B*E*E*F’ and ‘Undercurrents’ to name but a few and was quoted in 3D mag as one of Sydney’s latest rising talents. Lee Majors has an in depth understanding and passion for dance music with over 13 years on the dj circuit. Known for his twisted tech and driving minimal sets Lee has found his way around the country shaking every last drop from the late night set.

Dave Basek is a curious orchestra. From early experiments in the infancy of Australian dance music with modified turntables, reel machines, and distortion boxes, to his current situation at the helm of the rotating Junkbeats roster featuring all manner of noise generating people and machines, Basek has always maintained a fresh approach to live performance and electronic music. In the studio, he is responsible for overseeing the outputs of Junkbeats, and East Point Sounds, as well as the long list of musical collaborations borne from the label’s stable as well as allies from overseas, including Peret Mako, Hippe and Halo, Fred Everything, Kriece and George Sadlik. It is in the arena though where Basek does the most damage, packing and unpacking what can only be described as artillery, add to that an army of collaborators to man the controls, and the dancer is in for a long night dodging weapons.

Grown in the wild rainforests of far north Queensland, Vertical Transport is only a recent arrival in the city, originally hailing from Cairns. Developing through the intense northern rave collectives, Vertical brought his training south and pushed the psychadelic breakbeat and tech sound to the front at his own Urban Doof parties and through his own psy and floor driven productions. Drawing from 10 years experience DJing from dark rooms to wild escapes, Vertical Transport indeed lives up to his name using all any available equipment to get the crowd lifted. A skill that has been called upon to set up Dopamine, DJ Tom, and even the mighty Utah Saints.

A classically trained percussionist, with an adolescent rock drumming background, almost a decade in Brisbane’s house clubs and now a bluesman, Adrian Matyear’s genre spanning knowledge and record collection have shown him to be one of the most dedicated and involved practitioners of musical mood setting in Brisbane. Experience that has been called upon to set up heavyweights Inland Knights, Swirl People, Metro Area, Iz + Diz, Hippe, Troydon, James Curd, John Larner, DJ Freestyle, Ricardo Rae, Ralphski, Dj Heather, Da Sunlounge, Jonene, Carl Kennedy, Serge Santiago, Brett Johnson, Derrick Carter, Shonky, Tim Green, Italoboyz, and Jimpster. Whether it is through his weekly club Therapy, at Barsoma, or longterm engagements in Uncle at Family, Cloudland, Press Club, Jade Buddha or the infamous bohemian recovery Sundae, Adrian delivers an efficient and sexy party solution with every approach to the controls. During the week he can be found in the studio: producing, mixing, adapting, and creating audio energy, or digging through records in the city’s retail fronts, secondhand stores and private collections, seeking only the finest recorded works suitable for the creation of dancefloor melees in the nocturnal hours.