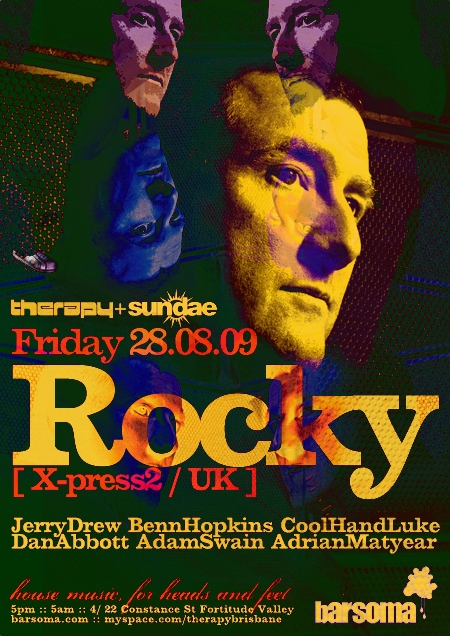 Tonight is no ordinary early spring evening in Brisbane. Tonight we gather in the balmy darkness to properly get down. Way down. The road ahead will be Rocky, though, down here, in the deep, that is just how we like it.

In the mid 1980s, about the time many DJs currently in the industry were taking their first steps, Rocky made his first foray into London’s underground club scene. Bringing a solid appreciation for the organic groove genres, his background of funk, hip hop, jazz and soul laid the foundations for an intrepid musical traveler to explore new sounds, particularly the late 80s acid house waves that were crashing on the city’s shores.

New friendships and musical collaborations quickly followed as his workload increased, including productions with the Boys Own Crew, and a blossoming project with cohort Diesel, and the manager of their local record store, Ashley Beedle, started to blow up. In 1992, the first incarnation of Xpress-2 put together the highly influential breakthrough album ‘Muzik Express’ and backed it up with a bunch of bomb track 12″s to chase it. Somewhere in there though, Rocky flipped, and found an ability cross any project, club and release with quality output under various collaborations including Ballistic Brothers, and Problem Kids, who would go on to release two albums and singles for Paper Recordings and Junior Boys Own while X-press2 remained in hibernation.

In 1999 X-press2 stepped out again, dropping the landmark long player ‘Muzikizm’ along with the massive mover “Lazy” featuring the unmistakable vocal of the Talking Head’s David Byrne. Understandably, their demand increased significantly over the next decade, taking them to all corners of the globe, and signing off on two more album projects, ‘Makeshift Feelgood’ and ‘Raise Your Hands,’ along the way.

Rocky’s deep and influential role in the dance music industry is called upon to educate and elevate clubbers worldwide, either through his impressive resume of releases, up front in the club, or across the airwaves. In every instance, Rocky brings a level of musical experience and determination rarely found anywhere else on the planet. It is not enough however to rest on past performance, and he continues to punch out release after solid release including upcoming singles for X-press2 and a pet sounds project with Terry Farley.

You can listen to Rocky, Diesel and Ashley Beedle on their highly respected weekly radio residency on London’s Kiss.

Setting the tables for the feast to follow, this evening we are joined by another house music master chef in Jerry Drew. Recently relocating to the warmer climes of Brisbane from the UK, Jerry left behind an impressive trail of club damage crisscrossing Europe from his base in London. Institutions such as Ministry of Sound, Pacha, Turnmills, The Cross and Es Vive felt the not so subtle bump of Jerry in the middle of the night, often alongside heavyweights including Paul Oakenfold, Danny Rampling, Seb Fontaine, Judge Jules, and Marshall Jefferson to name a few.

With almost two decades experience running underground clubs, and thoroughly smashing parties in locations as far flung as Moscow, Athens, Berlin, Ibiza, Milan and now of course Brisbane, Jerry arrives at the party with technical advantage and bags of experience, as well as instinctive direction for shaking out clubs with the choicest cuts.