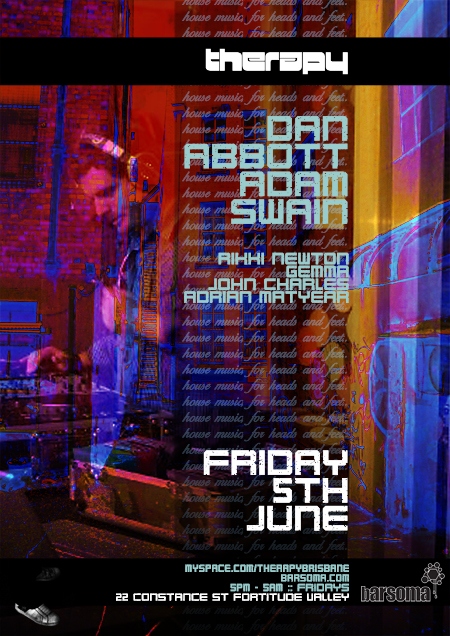 Occasionally we come across DJs with an interesting perspective on the sound, a confidence at the controls, and dedication to the dancefloor beyond simply spinning track to track. We like to keep these people close, even as they prefer to lurk in the periphery. This week sees two of the city’s most passionate house DJs, Dan Abbott and Adam Swain take the club for a deep and stomping ride.

A passionate collector, dedicated clubber, and talented mixer with a basement cache sound of evocative and bumping deep house and techno, and early hours sensibility, we have uncovered a dancefloor hero in Adam Swain.

Swain’s history sits deep in jazz, hip hop, soul, techno and deep house influences. His productions have developed a left of centre downbeat groove that neatly occupies a distinct corner of electronica and house production coming out of Brisbane at the moment. Solid productions under his belt and a peripheral DJ with niche aspirations, Swain is causing a movement, and it’s coming from deep below.

Recently Swain has engaged Sundae, Uncle, Bump n Funk, residency with Subtrakt, assisting Dan Abbott with the Babicz setup at Drop, opening up Barsoma each Friday, and peak time appearances at Therapy to display tidy mixing and an inspired appreciation of house music. Swain is deep in the pocket of Brisbane’s house eclectic. A unique sound and genuine excitement on every approach to the decks, he is a class DJ with a firm hand on the mixer and a deep thump in the club.

For some time now, supporting the niche corners of Brisbane’s underground set, this week sees the first peak time approach to the Therapy knobs and faders of supreme deep diver Dan Abbott.

An academic researcher of the deeper strains of house, specializing in quirky, deep techno, minimal and completely off the wall sounds, Dan’s approach to dancefloors comes from the far left, based in psychiatry.

An avid music collector, with an intelligent sense for tracks that cross the divide between sound system experience and physical response, Dan has taken to stepping out amongst the city’s party collective with impressive displays at Sundae, regular appearances at Subtrakt, and a notable appearance at Drop to set the scene for Rob Babicz.

Additionally, Dan’s collaborations with Adam Swain, under the Down Periscope moniker, have seen marked progress charting deep house, disco, downbeat, jazz and electronica in territory previously unexplored in Brisbane before.

Obviously, we are looking forward to a pretty intense mental prodding and poking as Dan Abbott takes on the peak for the first time tonight, bringing a solid bag of bleeps and boompty bass to lead our session. Being that the expected result is a trip down twisted lane, we are happy to let him take over and push our buttons.

Opening the club up for dinner and drinks after work is John Charles returning to the Down Periscope session in fine downbeat hip hop and jazzy electronica style. Setting the club up in deep and progressive tech house land are Therapist Gemma, and Subtrakt head honcho Rikki Newton, before Dan Abbott and Adam Swain lead tonight’s session with a deep house and minimal techno display, and Adrian Matyear takes the party to morning with bumpy house and deep techno.