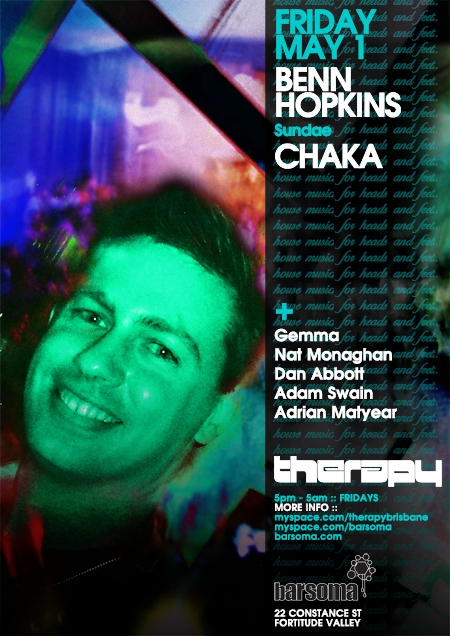 This week Therapy takes a bump and grind with two fine deep house selectors, both with long dedicated histories with the sound and an eagerness to let fly in a big space filled with speakers.

With a ruthless pursuit of an original sound, years of experience and a passion for bumping, sweating nightclubs; laying the foundations tonight is first time Therapist, though long term head, Chaka.

Only a recent import into Brisbane, Chaka has set about impressing in Press Club, Family, and his Sunday residency atop the Limes Hotel. Bringing about solid showings through deep house, tech and funky, smoky grooves, Chaka has taken a vintage approach to setting up rooms, preferring to bring bags of unique, esoteric and quirky rhythms, rather than the standard line, reminiscent of original house parties of old.

Tonight we are treated to a proper throwdown courtesy of a true disciple of the sound. Chaka has taken to preparing for this Therapy session with a unique angle and overflowing enthusiasm. We have been promised only an artful selection of dub, jazz, and soul influenced proper underground house, which is all we could ask for really, a good quality reason to have a stomp at the end of the week.

A solid player on the soulful tip, Benn Hopkins has been instrumental in shaping the deep style in Brisbane. A dedication to the sound, refined selection and knob-and-fader skills to back his play, Benn arrives for a long overdue Therapy session with a bag of dubbed out tribal deep house and ready to work.

A favourite of the underground house heads, Benn has maintained the deep line around the city, throwing down to appreciative crowds of dancefloor fitness freaks at Alhambra, Press Club, Belgian, GPO and Watt, amongst various guest engagements including programming Sharif Galal’s Groove Train on Triple J.

However, it is his coordination of the Sundae movement’s infiltration into Brisbane that has seen him take a prominent role in guiding the direction of the city’s house sound, and resulted in some famously off kilter parties. Seeking only to operate at a world class level, Benn’s unique skill set has been called upon to set the scene for JayJ, Yogi, Marques Wyatt, Andy Caldwell, Robert Owens, and recently Joey Negro.

Missing in action whilst on a US tour last year when Sundae met Therapy, Benn has waited patiently for a chance to serve it up in the dark, stark warehouse Barsoma. Sexy deep and throbbing tribal are on the menu, and the chef is spinning only the finest plates.

Joining Chaka and Benn Hopkins in the control centre this evening are lotempo party starters Dan Abbott and Adam Swain. Gemma and Nat Monaghan introducing the bass in the place with deep, rolling, bumpy house and Adrian Matyear closing out. Get your Therapy on this Friday 1st May.